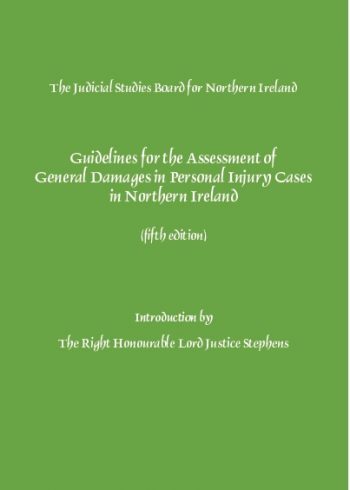 The new edition of the Guidelines for the Assessment of General Damages in Personal Injury Cases in Northern Ireland (the Green Book) has been released and is effective as of today.

This is the 5th edition of the Green Book compiled by a Committee of the Judicial Studies Board under the chairmanship of Lord Justice Stephens.

The previous edition was released six years ago in 2013 and coincided with major overhauls to the court system most particularly the increase in the County Court Jurisdiction to £30,000.00.

In previous Editions the figures were adjusted up to the date of publication using RPI on the basis that during the 5 years of Guidelines for the Assessment of General Damages in Personal Injury Cases in Northern Ireland the Guidelines the figures could and would be further adjusted in individual cases.

The Committee concluded that this did not occur so in the fifth Edition they factored forward for inflation, again applying RPI at its present rate, to the midline of the next 5 years on the basis that the guideline figures would be applicable for the entire 5 year period.

The 5th edition has taken steps to amend (with the exception of extremely minor whiplash injuries) most figures upward by a value of roughly 20% from the 4th edition.

The 5th edition has for the first time accounted and made specific reference to Pleural Plaques.  This of course will be in response to the Law passed by the NI Assembly which allowed compensation for the condition.

Pleural Plaques. On their own, asymptomatic pleural plaques would justify an award in the region of £3,500. It is unlikely that any case of distress and anxiety caused by a diagnosis of pleural plaques, absent some evidence of grave psychiatric sequelae, will recover outside the bracket of £6,000 – £17,500 however long the stress or anxiety lingers on.

Interestingly the Committee considered that the guidelines in the Fourth Edition for extremely minor soft tissue injuries to the neck and back remained adequate so those guidelines were not adjusted.  They remain at ‘up to £3000.00’ and ‘up to £4000.00’ respectively.

The fifth edition does make a change to the award band immediately above this extremely minor injury band in for both neck injuries and back injuries.

Previous editions provided a range and accounted for a ‘bottom’ figure in these types of injuries.

Where a full recovery takes place without surgery within a period of several months and two years. This bracket will also apply to very short-term acceleration and/or exacerbation injuries, usually less than two years. – £3000.00 – £15,000.00.

In the fifth edition however, it has removed the ‘bottom figure’ and instead reads;

Where a full recovery takes place without surgery within a period of several months and two years. This bracket will also apply to very short-term acceleration and/or exacerbation injuries, usually less than two years. – Up to £18,000.00.

Ignoring the 20% increase that is seen across the board, it is interesting to note the removal of the bottom figure.  Insurers may of course seek to argue that this removal, in theory, gives greater scope to Judges who may not be satisfied with; the severity of injuries, the extent of treatment required, impact of the symptoms or degree of pain, despite lasting for the required period of 1-2 years.

The new edition is available online in the Judicial Studies Board section of the JudiciaryNI website www.judiciaryni.uk/judicial-studies-board-publications and in hard copy from the Law Society Library.